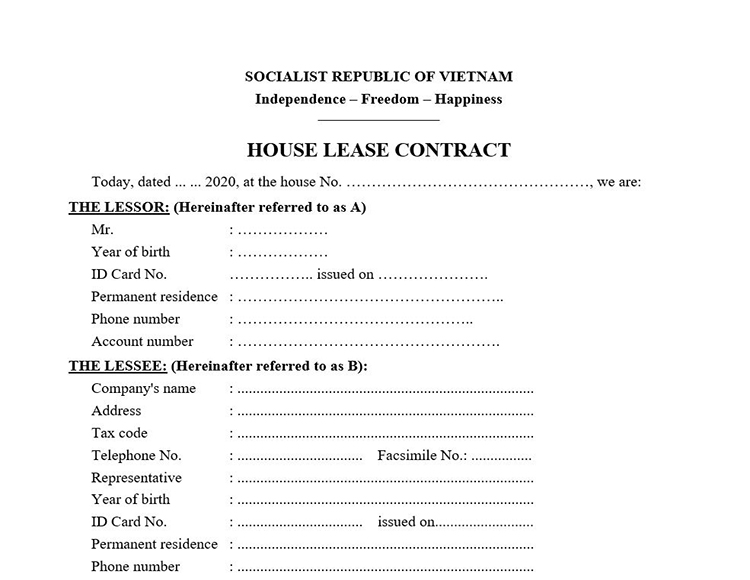 SOCIALIST REPUBLIC OF VIETNAM
Independence – Freedom – Happiness
________________________________
HOUSE LEASE CONTRACT
Today, dated ... ... 2020, at the house No. …………………………………………, we are:
THE LESSOR: (Hereinafter referred to as A) THE LESSEE: (Hereinafter referred to as B): After discussion, the two parties have mutually agreed to enter into the house lease contract with the following agreement:
ARTICLE 1: THE HOUSE FOR LEASE, PURPOSES OF USE ARTICLE 2: DURATION OF THE LEASE ARTICLE 3: RENTAL FEE, SECURITY DEPOSIT AND PAYMENT METHOD ARTICLE 4: RESPONSIBILITIES OF THE TWO PARTIES
1/ Party A’s responsibilities: 2/ Party B’s responsibilities: ARTICLE 5: THE TWO PARTIES UNDERTAKE: ARTICLE 6: UNILATERAL TERMINATION OF THE CONTRACT ARTICLE 7: CONTRACT TERMINATION
The contract will be terminated in the following cases: ARTICLE 8: GENERAL PROVISIONS